Andalusia – probably the most evocative region in Spain.

This sun-blessed region offers the quintissential Mediterranean experience and is a joy to explore in a campervan or motorhome from Flamenco Campers.

To whet your appetite for adventure, here are 3 of our favourite routes for cmpervans in Andalusia. Over the years we have become experts in campervanning in Spain, whether it is Spring, Summer, Autumn or Winter.

Explore the routes at your own pace, personalising your holiday. We’re here to help you along the way, with recommendations for campsites, motorhome stopovers, campsites, and motorhome parks in Spain.

1.- The Coast of Light – The wild beaches of the Costa de la Luz

The name says it all, ‘the coast of light’. Yes, the western part of Andalusia is blessed with an extraordinary abundance of bright sunlight. The Atlantic coast is the perfect landscape to enjoy in a camper van, or motorhome. It is a great place to meet not only creative people, lovers of nature but also athletes enjoying water sports, like kite surfing and wind surfing.

This stunningly beautiful part of western Andalusia is also home to exceptional beaches, forests of Mediterranean pines and cork oaks, quintessential Andalusian white villages, and one of the most important wetland National Parks in Europe. It’s also a great area for foodies, with lots of local cuisine using regional ingredients, from tasty tapas, the very best gourmet ham, to fino sherry and crisp white wines. So get on board your Flamenco Campers van and discover Spain’s Wild West!

Head west from our Malaga Flamenco Campers depot to the port town of Tarifa. This journey in your campervan will take less than 2 hours, but you may want to enjoy stopping off along the way to see Marbella, Estepona, and maybe even the Barbary Apes of Gibraltar!

Tarifa is a such a cool town – bohemian, quirky and with lots of great places to eat and drink. It’s also Spain’s most southernly point, where the views to Africa are superb. You can park your campervan and walk out on the causeway and have the Mediterranean on one side of you and the Atlantic on the other!

After a stay in Tarifa, experience the amazing beaches on the way to Bolonia. Bolonia is a small hamlet by the sea, with beautiful beaches.

The hilltop village of Vejer de la Frontera will capture your heart. It’s a wonderfully preserved Andalusian village that has emerged as quite a foodie destination.

This historic naval city has a spectacular old town that will transport you to eth Caribbean and the Americas. It was at the heart of the Spanish Empire’s trade with the new world and the architecture and spirit of old city is unique.

This Flamenco Campers motorhome and campervan itinerary will let you see the best of Cadiz province, a chilled part of Spain that has understandably been christened Spain’s Cadizfornia – the perfect Flamenco Campers destination!

2.-Game of Thrones – Discover the exotic Moorish history of Andalusia 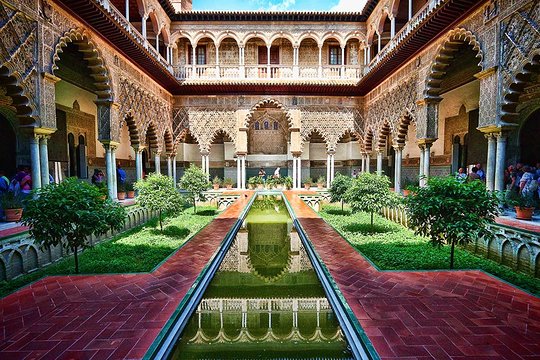 The fantasy HBO television series ‘Game of Thrones’ has become an international phenomenon. The high-budget adaptation of George R. R. Martin’s series of novels, ‘A Song of Ice and Fire’ has become compulsive viewing for millions around the world.

The fictional continents of Westeros and Essos and their characters have been brought to life thanks to award-winning acting and exceptional special effects. Yet some of the greatest stars are the locations – many of which are in southern Spain! This Flamenco Campers itinerary will take you on a journey of discovery.

Head north west to Andalusia’s capital. Seville is on the world’s most beautiful cities and the drive there will be fascinating passing through mountains, and pastures of sunflowers, and fields of cotton – a beautiful drive in a campervan and there are plenty of motorhome ad van stop over sites on the way.

Seville is rich a magnificent architecture, including the ancient fort, the medieval Alcázar.

Alcázar of Seville – This remarkable building is part of the legacy of Southern Spain’s Moorish past. The fortress and water gardens have been used as a location for a few series, and guides Games of Thrones tours are also available.

Atarazanas of Seville – these were the Royal Shipyards, where the Royal Fleet that sailed to the new world were build. The vast structure of arches and vaulted ceilings was used in the show as a set.

Itálica – there Roman ruins, outside of Seville are where Emperor Trajan was born. The site’s remarkable amphitheatre is a must-see for fans of the show.

Cordoba is one of Andalusia’s most charming regional capitals and amazing also home to 4 UNESCO protections. The city is so rich in history. No wonder it’s a favourite for film-makers! The unique Roman Bridge is a site to behold and was used in the series. The city has facilities on the outskirts for campervans and motorhomes.

Osuna is truly part of the hidden Spain, a spectacular renaissance town surrounded by beautiful countryside. It’s a must for this campervan holiday itinerary. Osuna’s bullring has been featured in Games of Thrones ins an amazing fight scene (including dragons!) in season 5. Whilst in the city take the opportunity to visit some the remarkable churches, and monasteries – full of world class renaissance art.

3.- From the Desert and Mountains to the Sea – Filmtastic Almeria to exotic Granada 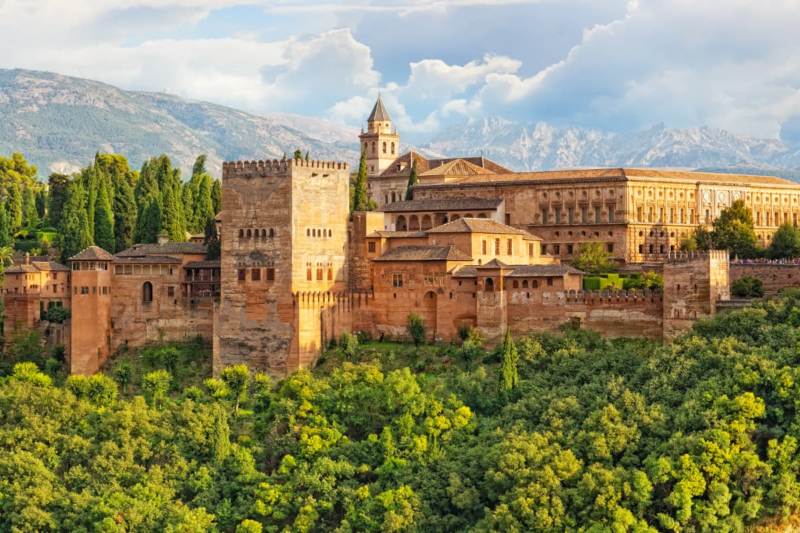 This Flamenco Campers itinerary combines the panoramic, cinematic landscape of Almeria, in eastern Andalusia, with the with the captivating history and beauty of Granada. It’s a fantastic route to enjoy in a camper van or motorhome. It shows why Spain is such a great destination for campervan holidays.

Heading east is to discover the road less travelled; the Andalusia that is authentic. Passing Malaga, you drive towards Granada province, and the fascinating Tropical Coast, a region with a privileged microclimate that is so favourable that farmers grow tropical fruits like mangoes, lychees, star fruit and more. Continuing east you will reach the capital of Almeria, Andalusia’s most eastern province.

Almeria capital is a fascinating coastal city and the gateway to the fabulous Gabo de Gata, a wonderful protected coastal natural park or semi-arid landscape that was popular for filming western movies and locations for blockbusters like Indiana Jones. For hikers, the volcanic terrain is fascinating and full of unusual plant and animal life. The sea here is pristine. It’s a real favourite for Flamenco Campers clients who often spend entire holidays in this area. There are sites for stop overs with campervans and motorhomes and camp sites too.

These two drives will take you through some spectacular scenery. From the semi-arid landscapes of Almeria, to the forested foothills of the Sierra Nevada mountain range. Guadix is certainly worth a stop. Home to remarkable cave houses and other worldly geology.

Upon arriving in Granada one reaches one of the most emblematic cities of Andalusia. A modern, vibrant metropolis, Granada is also home to the Alhambra, one of the most remarkable, and visited sites in Europe. Together with the UNESCO medieval Albaicin district, the Alhambra palace is an amazing Moorish legacy. It is unmissable.

For more information on Flamenco Campers routes and itineraries through Southern Spain, please visit our blog, or contact us. We’ll be happy to help plan you next motorhome holiday in Spain.