10 Places in Southern Spain You MUST Visit in a Campervan

Andalusia is one of Europe’s most spectacular destinations for a campervan or motorhome holiday.

At Flamenco Campers we believe that Southern Spain has it all. The best climate in Europe, stunning national parks, snowy mountain peaks, golden beaches, historic towns and villages, and a fascinating culture.

Yet with almost 90,000 square kilometres of Andalusia to explore, there’s too much to see in just one campervan holiday.

So we thought we’d give you some inspiration, with a list of 10 unmissable places you should consider visiting on a Flamenco Campers holiday here in sunny Southern Spain.

Please note some of these attractions require reservations in advance. If you are travelling in mid- to high- season, please book well in advance. 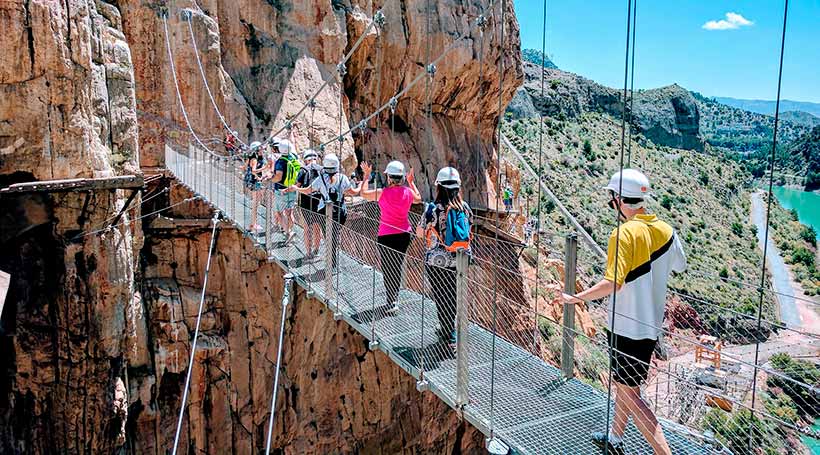 This unique walkway, known as the King’s Pathway, is a spectacular hiking route that passes through a stunning gorge and valley. Almost 3 kilometres of the recently restored and rebuilt walkway run directly alongside the rock face of the gorge offering spectacular views – a truly unique experience.

The hiking route includes a ‘wow’ factor suspension bridge across the gorge. The route is well-designed with up to date safety features and is suitable for all the family including kids over 8 years old. Just make sure you are wearing proper covered shoes. The attraction provides hard hats to all walkers.

The surrounding countryside is well worth exploring in your campervan or motorhome. Known as Andalusia’s Lake District, the landscape is punctuated with lakes of emerald green water where you can go kayaking and swimming. This destination is less than an hour’s drive from Flamenco Campers’ base and makes for a superb start to a campervan or motorhome adventure in Southern Spain. You can find campsites and parking areas that welcome campers. 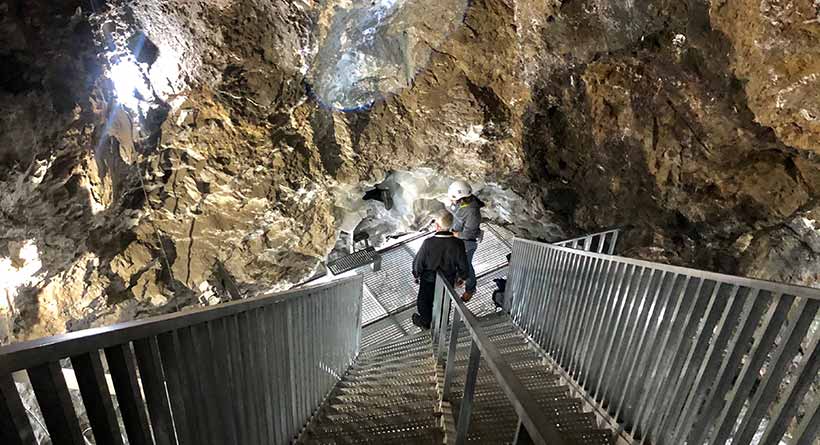 The geode at Pulpi, in western Andalusia, is about 4 hours’ drive in your campervan from the Flamenco Campers’ base. It is the world’s largest crystal geode cave open to the public. It is amazing. Visitors get to explore the abandoned lead and silver mine too, where the geode was discovered. We have a Flamenco Campers itinerary for this attraction, which also suggests exploring the wonderful Cabo de Gata natural park.

The drive east is really interesting, passing beautiful seaside towns like Nerja. Once you have arrived at Pulpi you can also enjoy the coast that is very close by.  Returning west, we suggest you visit the Cabo de Gata coastal natural park. It is ideal for a campervan or motorhome adventure. Beautiful scenery, quiet, unspoilt beaches and a mainly dry and sunny climate. There are campsites that welcome campervans and motorhomes and off season there are designated parking areas in the natural park that can be enjoyed.

Andalusia’s Coast of Light has the best beaches! 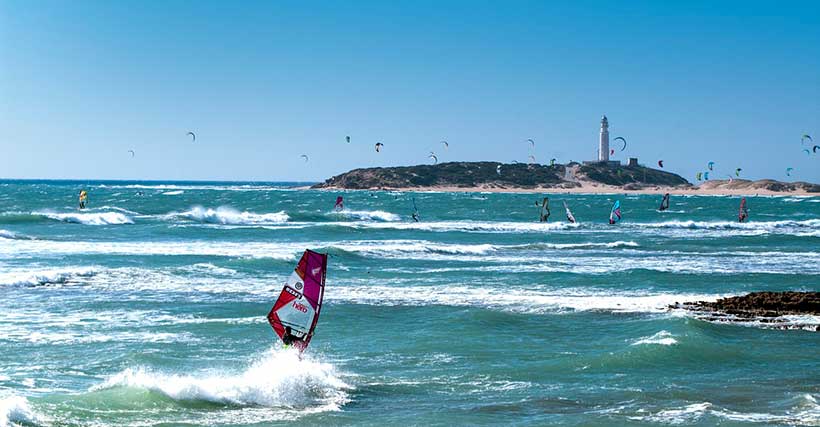 Andalusia’s Atlantic ‘coast of light’ is home to some of Europe’s most remarkable beaches. Running north from Gibraltar this natural, unspoilt coast can be reached in less than two hour’s drive from the Flamenco Campers’ base.

From the historic port city of Tarifa, the Atlantic shoreline invites you to explore. This is a popular destination for campervans and motorhomes, with a great community of nature and sport loving travellers enjoying the unique natural environment. If you are passionate about kite or wind surfing, then this is one of the best places to practice the sport in Europe.

In just over 3 hours’ drive from the Flamenco Campers base you can be in another world!

Mining has been practiced in the Rio Tinto area for some 3,000 years. First the Phoenicians, then the Romans, with modern mining continuing into the 20th century.  The nearby river runs almost red due to the effects of the iron and copper from the ground. It is quite extraordinary to see the coloured water. NASA visited the Rio Tinto – the red river – to see how these waters sustain life, as they are considered to be conditions similar to Mars!

Now much the mining area has been transformed into a park attraction where visitors can ride a vintage mining train, see a mine, and even visit a restored English village that was built here in the 1950s when the mines were run by a British company. It is said that Spain’s first golf course and first football pitch were built here by the Brits in the last century.

Huelva is a fascinating region. Much of the coast is pine clad forests and wonderful sandy beaches that run into Portugal’s Algarve. I great place to explore in your campervan or motorhome, and it will give you a very different perspective of Andalusia.

The ancient fortified Al Andalus city that still sharing secrets from the past!

Cordoba is one of Andalusia’s most important cultural cities. It is unique in that it has 4 UNESCO world heritage recognitions, making it an unmissable destination for lovers of history, culture and architecture. The city’s entire historic centre is a UNESCO world heritage site, with includes the ancient Roman Bridge and also the Alcázar royal palace. The Mosque-Cathedral is unique in the world and is another of Cordoba’s UNESCO recognised attractions.

If you visit in May, look out for the city’s UNESCO Patios Festival, where the many courtyards of old town are decorated in true Andalusian style with blooming flowers in colourful pots.

The city’s fourth UNESCO feature is Medina Azahara, The Shining City. These remarkable ruins, just outside Cordoba, are from a magnificent Moorish medieval capital, dating back some 1000 years. The site is truly fascinating to explore.

Cordoba will surely be one of your favourite destinations on a campervan holiday.

The world-renowned citadel is one of Europe’s most visited sights!

The UNESCO Alhambra, built with a commanding position on La Sabica hill, overlooking the valley of Granada, with the peaks of the Sierra Nevada mountain range behind, is the most iconic sights of Andalusia. The ancient complex combines a fortress, with palaces and also a small medina. There is so much to explore, from the wonderful Generalife Gardens the intricately designed Nasrid Palaces with the famous Patio of the Lions, and also more relatively recent additions including the Palace to Emperor Charles V.

Opposite is the ancient city district, the Albaicyn, whilst below is the modern city of Granada. It is best to leave your campervan in the new city, where parking is easier. The province of Granada includes mountains and coast and makes for a delightful campervan holiday.

When purchasing tickets to visit the Alhambra, please make sure you buy your tickets from the official website.

One of Andalusia’s most spectacular nature reserves!

Jaen province is famous for being the world’s largest growing area of olives. Yet for campervan and motorhome enthusiasts, the reason to visit has to be the magnificent natural park of Cazorla, Segura y Las Villas. The park is vast, with a rich diversity of wildlife. There are campsites too, within the natural reserve, so you can overnight in your campervan or motorhome and enjoy the full experience of being immersed in nature.

There are some beautiful hiking routes, that pass waterfalls. The scale and magnitude of the park is really impressive. It’s the perfect escapade for a campervan holiday in Southern Spain.

The extraordinary Royal Palace that Game of Thrones fans will love!

With such a rich and colourful history, it’s little wonder that Southern Spain is so popular as a film location. It has stunning scenery and remarkable architecture. The iconic HBO series, Game of Thrones, used Andalucia for many scenes. The Royal Alcazar, an ancient palace in Seville, and a UNESCO world heritage site, has featured in a few GOT episodes. If you love the show, then look out for our Game of Thrones campervan itinerary.

Seville province is a delight to explore in a motorhome or campervan. There are many picturesque towns and villages to visit and quiet roads to explore in your van. 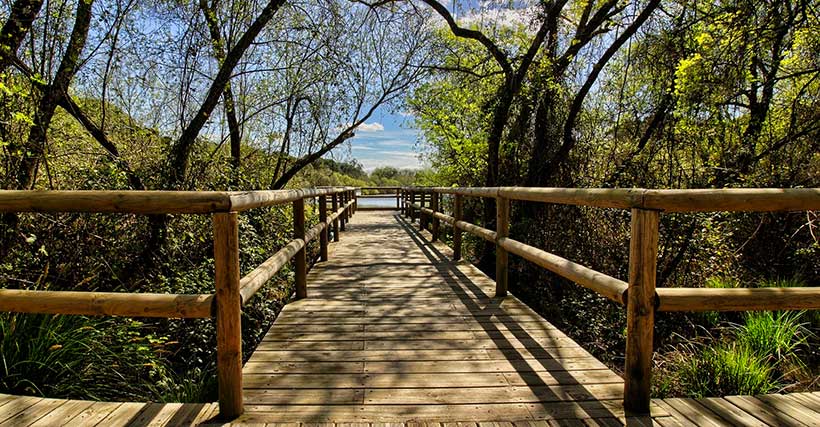 Doñana is Andalusia’s second national park, and a truly beautiful nature reserve. The area is huge and encompasses pine forests, nature trails, wetlands and even protected beaches. Nearby are campsites set within the pine forests. From there you can book excursions that go deep into the park, offering unprecedented access and the chance to see some spectacular birdlife and animals.

Home to the highest peak on mainland Spain where you can ski in the sunshine!

The vast mountain range of the Sierra Nevada is an all-year destination for sports and nature lovers. The national park has a good infrastructure for visitors travelling with a motorhome or campervan, offering campsites, parking and viewpoints.

During winter, Sierra Nevada is Europe’s southmost ski station, with hundreds of ski and boarding runs. The mountain village at the heart of the ski station has plenty of places to eat and enjoy a drink on sunny terraces with views of the peaks.

In spring Sierra Nevada is green and verdant, full of wildflowers, that are nourished by the snowmelt water. In summer the villages of Sierra Nevada and the picturesque Alpujarra provide a refreshing respite from the heat of the season. Up high in the sierra the air is refreshing! And the villages are fascinating to explore.

For more information explore more of our Flamenco Campers website, or contact us for campervan holiday ideas, and prices for hiring a campervan or motorhome in Spain.