Within minutes of leaving the motorway, the peace and tranquillity of the semi-arid landscape embraced me. I pulled over by an historic, restored windmill, its simple white structure, with dark conical wooden roof and fragile looking sails provided some shade from the warmth of the Andalusian sun. 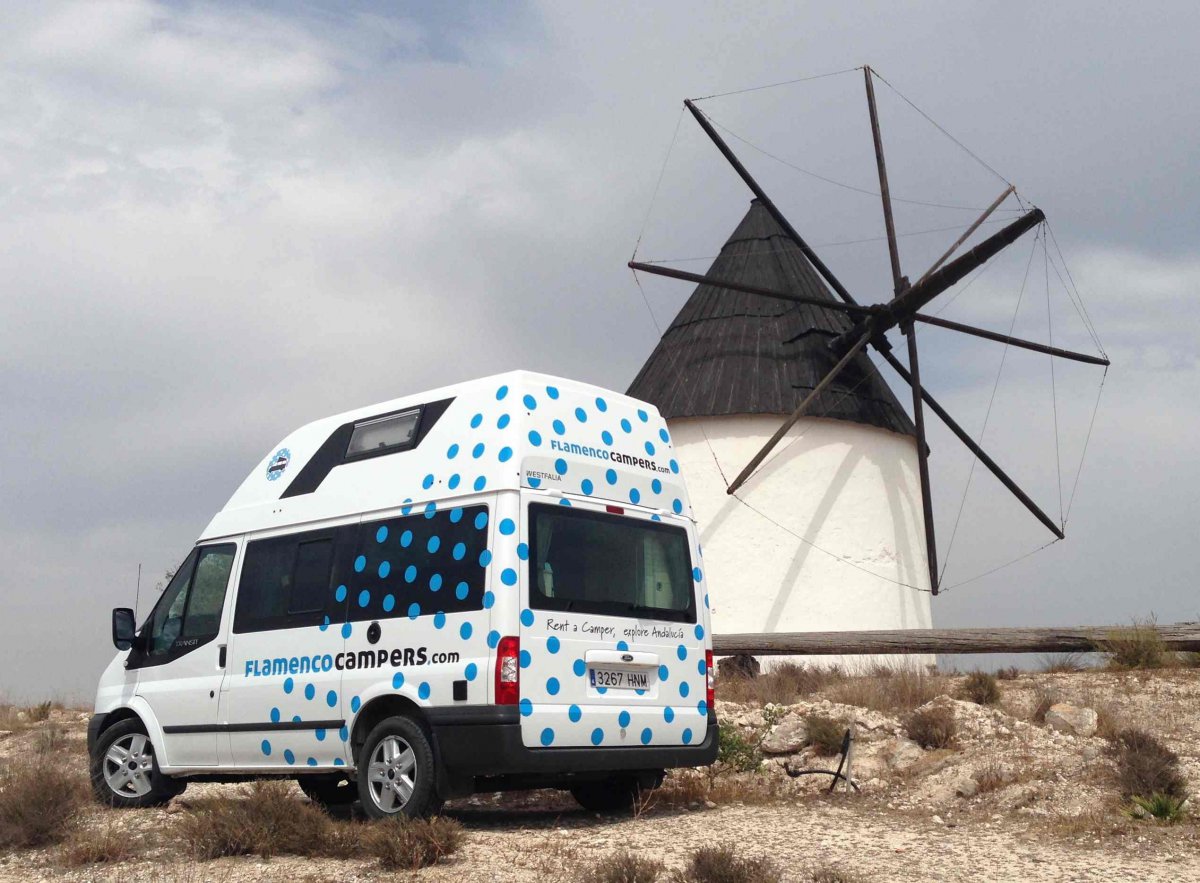 I’d been on the road for a few hours, having left the scented pine forests of Malaga province, passed through the citrus and exotic fruit groves of the Costa Tropical, before reaching one of the driest areas of Spain, the eastern province of Almeria. Home to Europe’s only desert, Tabernas, the striking panoramas of this region have been backdrops to some of the most iconic Western films of all time, including ‘A Fist Full of Dollars’, ‘The Good, Bad and the Ugly’ and 'Once Upon a Time in the West’. Almeria had been a favourite location for Sergio Leone’s ‘Spaghetti Westerns’ and remains a popular place for publicity shoots and movie making.
I was with ‘Pepa’, with whom I was to share an intimate few days, an adventure on the open road.

I had been introduced to Pepa only that morning, in the cavernous warehouse of Flamenco Campers, a small family run operation based a few minutes from Malaga’s International Airport. Created by Gonzalo and Carolina, whose passion for the great outdoors has taken them across Europe and North Africa in campervans, Flamenco Campers now offers stylish nomads the chance to indulge their own adventurous spirit, exploring and discovering Andalucia.
Eager and excited to hit the highway and start my own adventure, I arrived early to be greeted by Gonzalo and Carolina’s small fleet of immaculate, personalised campervans, imaginatively presented and named.

Pepa is a Ford Transit Nugget TDI, but not just any Transit. She has been fully kitted out by Westfalia, making innovative use of every square centimetre. There were two fold out (and very comfortable) double beds; a small kitchen with gas stove and fridge; a compact wardrobe, lots of storage lockers; and an al fresco shower. There was plenty of attention to detail too, from flexible LED reading lights by the bed, a sound system that allowed me to plug in my iPhone, to useful and thoughtful items in the cupboards. In short Pepa was a full