Welcome to the 3th part of my Andalucía Tour reports!

After having introduced you to “Lola”, now it is the turn of the campsites: different types of accommodation, not only campsites. 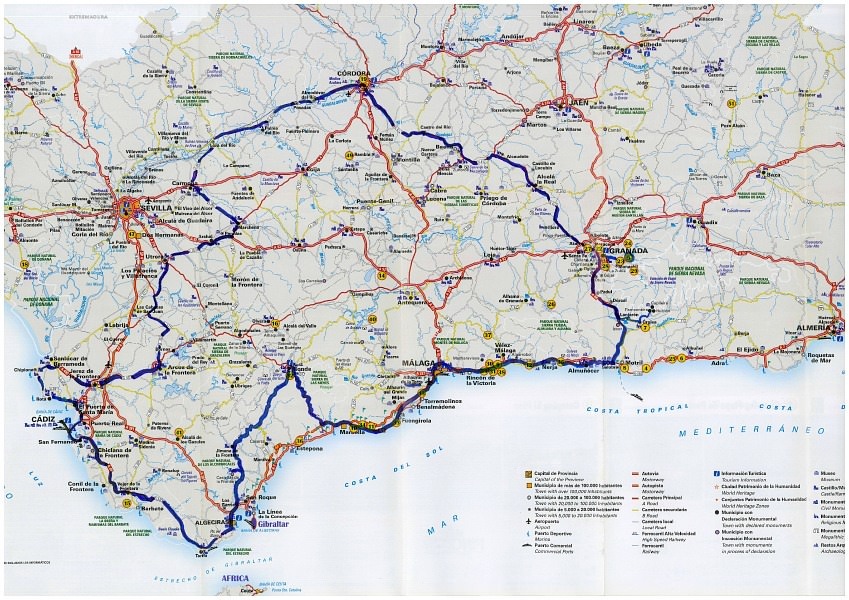 We have outlined the map-route clockwise.

But that’s enough for a preface, now let’s get to the point!

Camping “El Sur” is located a few hundred metres outside the amazing city of Ronda. The course is signposted on site and fairly easy to find.

We were received in a very friendly way but, to the owner’s disappointment, we announced we wanted to stay for just one night. We found the price (€ 22 for one night, without electricity) quite acceptable. 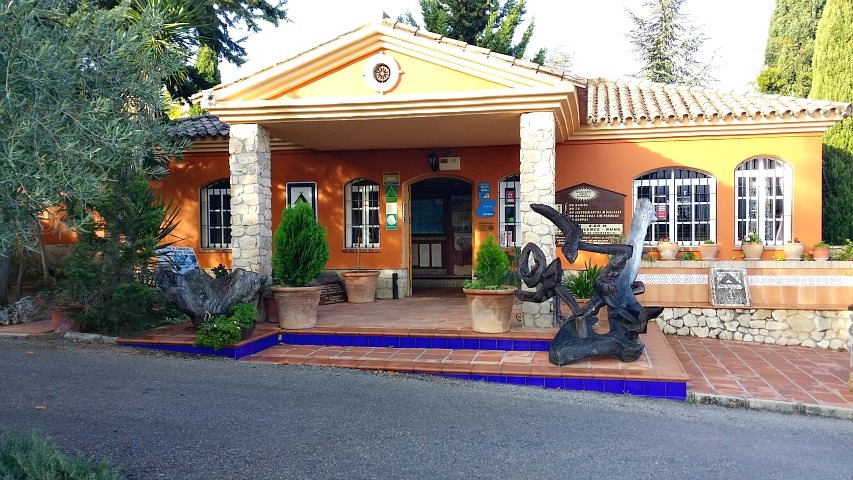 The place is fairly large and you can find plots, cottages, a playground, a swimming pool and a restaurant.

Ronda can be easily reached on foot if you are not afraid of a little hike, and excellent if you have a bike!

As it was our first day, we had to deal with a few little drawbacks: how to manage “Lola” in a skilful way and how to get to our “Camping El Sur” before darkness. 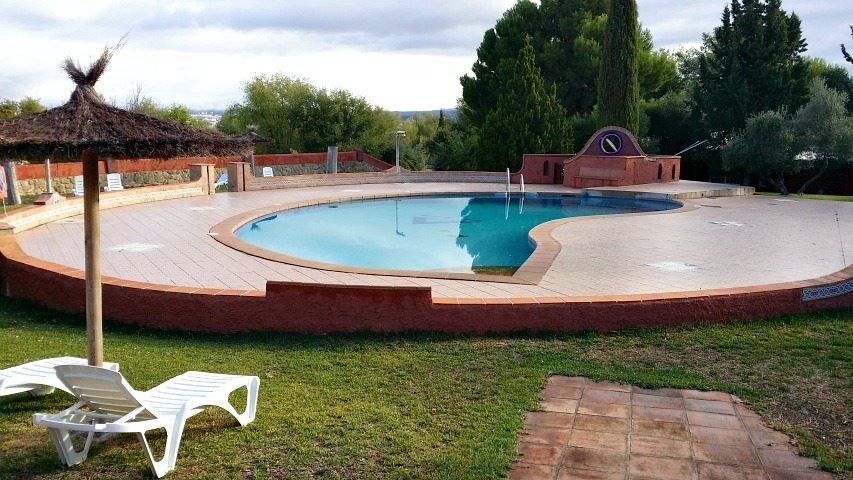 In order not to allow the start of our tour to be stressful, we chose the neighbouring restaurant to feel the sense of “we have arrived” in our hearts.

The menu consisted of five tapas and a large glass of beer or sangría for € 9.90. Bought! 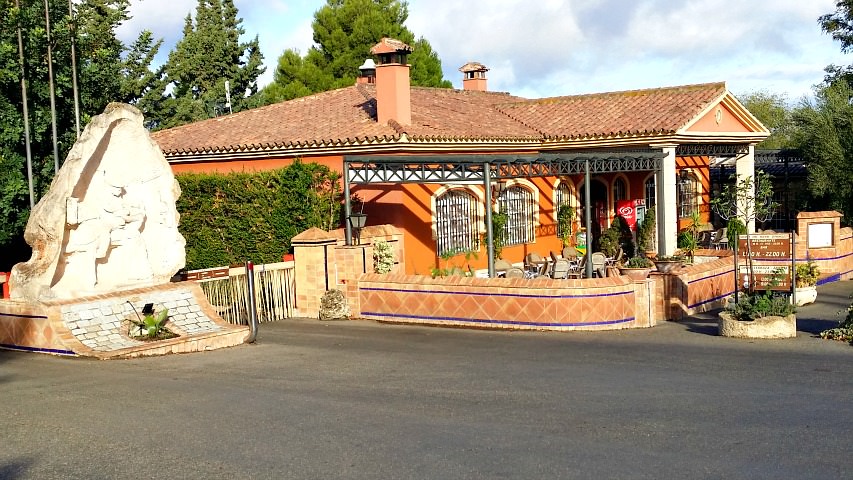 This meal after a long tiring day provided us with a deep and restful sleep.

The next morning we were on our walk to Ronda. We knew we had to check-out by 13:30 if we didn’t want to be overcharged. The additional cost was so small that we preferred to pay for it instead of strolling around looking for a parking place for Lola.

To know more about exciting experiences in Tarifa ─the southernmost point of Europe─, you can read a detailed report in Part 1.

“Camping Tarifa” was recommended to us by Gonzalo, the owner of Flamenco Campers, which proved to be a real hit! 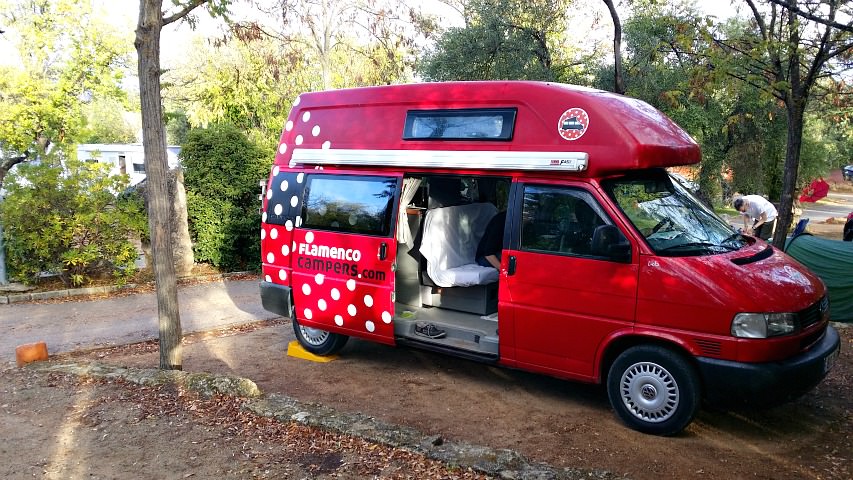 The camping offers a fantastic price/performance ratio: € 17 including electricity, wi-fi and the chance to choose a parking place. Besides, it is quite near the beach and the general store.

Could we ever imagine to spend a whole winter here? A real dream!

The second day was full of impressions and we decided to have dinner at the pizzeria located right on the square and next to the pool and before going to bed we still had time to have a look at the open general store.

While my wife was very impressed, my verdict was rather moderate. That’s perhaps because the women’s section had been renovated and it is more modern than the rest. 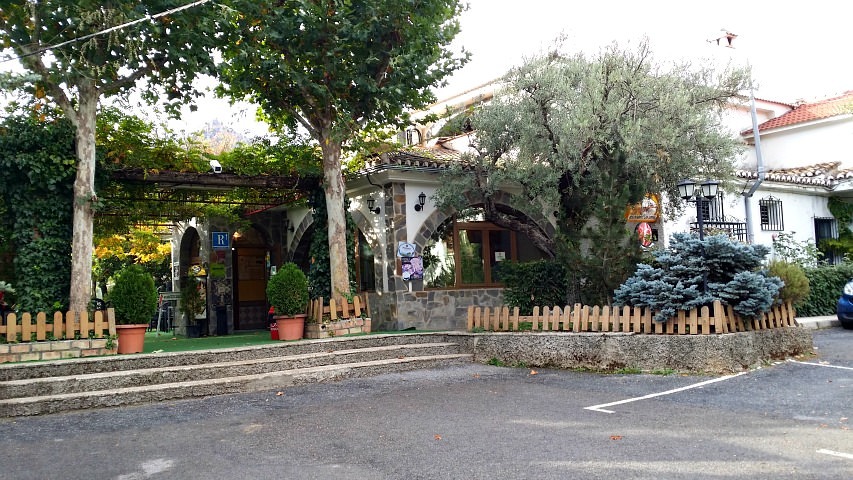 The direct access to the beach makes “Camping Tarifa” extremely popular with (kite-)surfers who provide the area with a very special atmosphere. Loving! 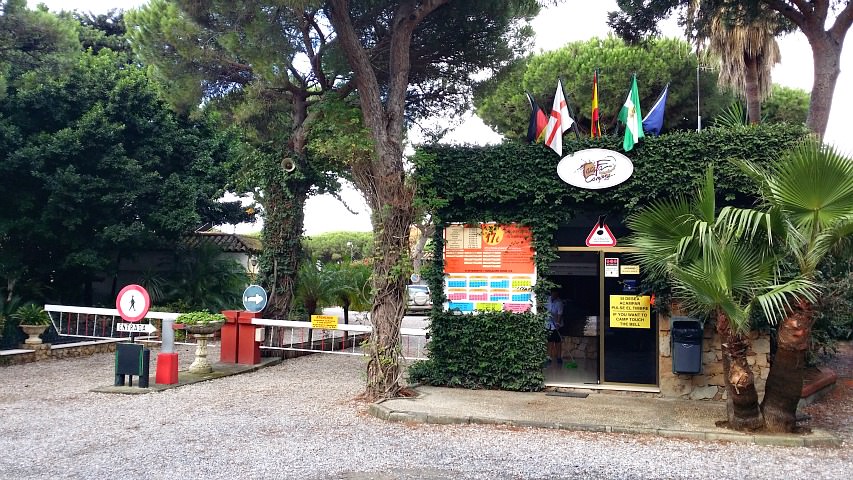 Dr Camp’s conclusion to “Camping Tarifa”: the only thing we did not like was the fact we had to continue the tour after two days … ;-)

Otherwise you should be aware the campsite is a few kilometres outside the centre of Tarifa. No problem if you have a bicycle. To go on foot is really too far and the main street is not particularly nice and, as there’s no bus service, a taxi is the only alternative.

Since we found no camping in our records to fit our program, we had to consult our guidebook.

Supposedly, there should be something on the harbour which turned to be ordinary parking bays. No problem with Lola that’s slim enough!

Previously we had stocked up at the supermarket with bread, sausage and cheese for dinner and we sat on the harbour wall to dine in a “vanlife” way.

I felt itches on my foot and on my hand. Obviously, there were probably one or another mosquito, so we preferred to warp us into the vehicle. 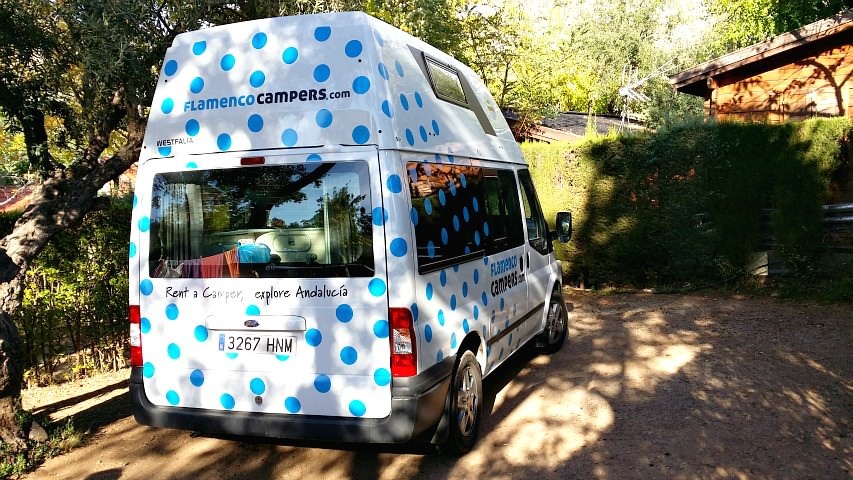 Unfortunately, the mosquitoes were already there, and although we tried to spend a quiet night at the harbour wildcamping, the bloody insects drove us crazy.

Sometime in the middle of the night, I spoke it out loud: “We must get out of here!”

So we drew the curtains and looked at the map for a place away from mosquitoes. We headed for Rota, a city on the coast at about 50 kilometres from Cádiz.

After having looked for a suitable place through the old town, we directed our steps to the beach promenade searching for a space to sleep for a few hours. The good news: we woke up late in the morning on a beach in the middle of the city, what is well-known as “Urban Camping” ;-)

As he had arrived in Arcos de la Frontera in the early evening, we had time to loiter around this “white city”. To our disappointment, no campsite near …

This time the guidebook gave us a useful tip: there was one at a few kilometres away, right by the seaside where we could stay at a parking lot. 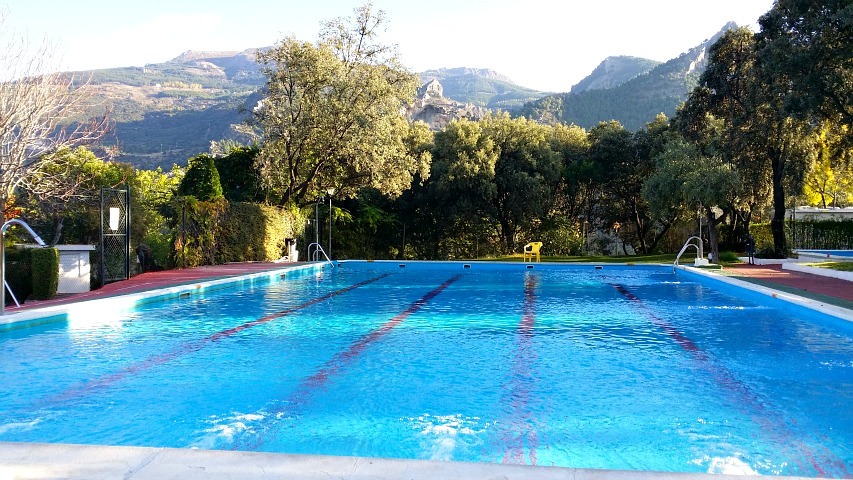 Since we had absolutely no better idea, we went there … and we loved it!

Although the parking lot was at the hotel, it doesn’t belong to it: it is public and free.

It offers a fantastic view of the Lago de los Arcos and it is possible to eat at the terrace whenever you want, even though we got the necessary supplies for the evening. And … no … no mosquitoes!

A night to remember under the motto “the best of both worlds” and a place to recommend: inviting nature, a restaurant, a feeling of peace and security … and completely free.

During a visit to Córdoba, the choice is quite easy: “Camping El Brillante” is the only place on site, and even located quite near the city centre.

But that’s the only thing that is favourable – its location.

A number of drawbacks to take into consideration: no late check-out, no credit card payments, no free seats, not at all. At the price of € 27 for the two of us and the parking place … and € 5.50 per night for the electricity supply!

We took it with humour, we could sleep two nights at no cost. 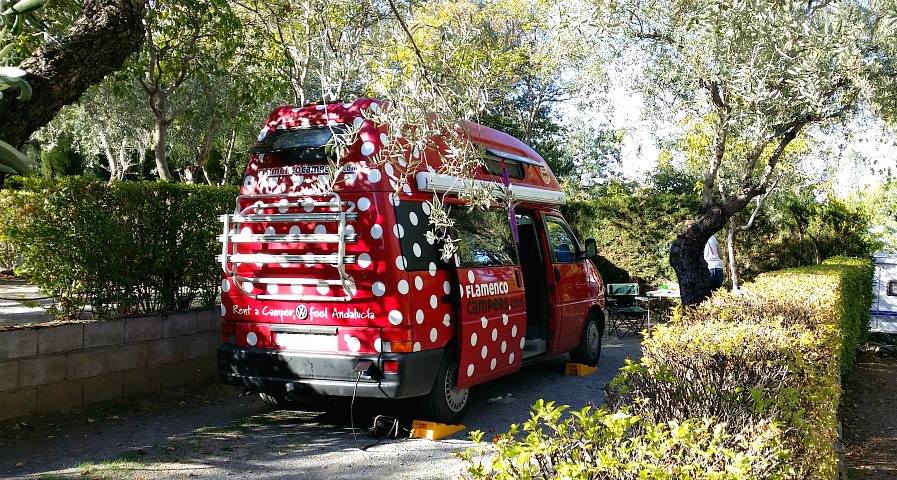 In principle, there is nothing to say against the place. We were given a very nice “covered” parking place, clean sanitary facilities and quiet nights and even a bus stop just outside the door which brings you to the centre of town in a few minutes for just € 1.20.

Despite having arrived at the campsite in the evening, we decided to have the first look at the old town of Córdoba. The details can be found at the travelogue.

As already mentioned, the camping owner was unlikely to respond to the campers’ requests.

Since 12 o’clock was the deadline to check-out, we drove the next morning with Lola in the city and succeded in finding a free parking.

Dr Camp’s conclusion to “Camping El Brillante”: as mentioned before, there is no alternative. The place is also not wrong but, probably due to prices, we limited our stay up to 2 nights. Overall acceptable.

In the travelogue I have already raved about Granada. But the most remarkable thing was that, after a beginning of the journey with mixed feelings, our choice of the camp turned out to be really fantastic.

We drove uphill towards Granada, zigzagging the ridges of Sierra Nevada. And here is a campsite? Quite right … and excellent! 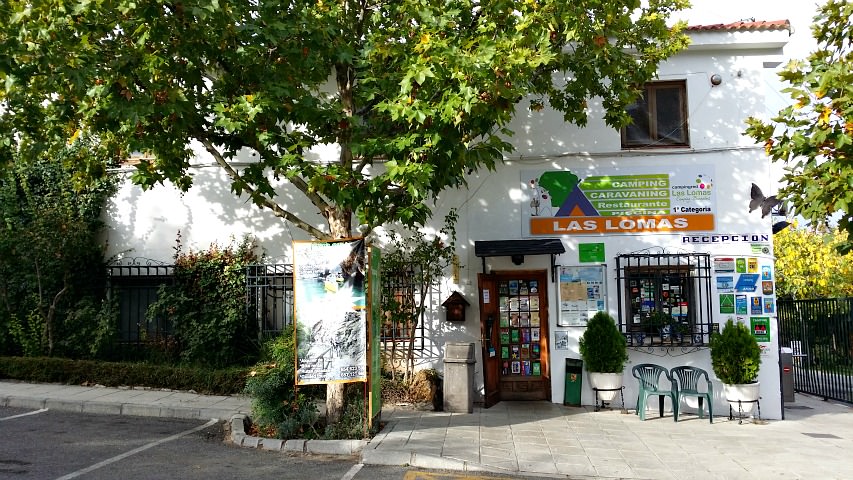 Its most significant attraction is, of course, the situation in the mountains overlooking a deeper reservoir. Las Lomas offers the possibility to choose your parking space after a preliminary inspection from where you are able to catch that fantastic panorama.

With a special camping card you can get right from Flamenco Campers, the price per night is € 18 including electricity. This bonus was granted to us for the second night, probably because the place is moderately occupied during the low season.

We chose a parking place near the sanitary building which was modern and in perfect conditions. We were ready then to visit Granada with a fresh neat sensation. 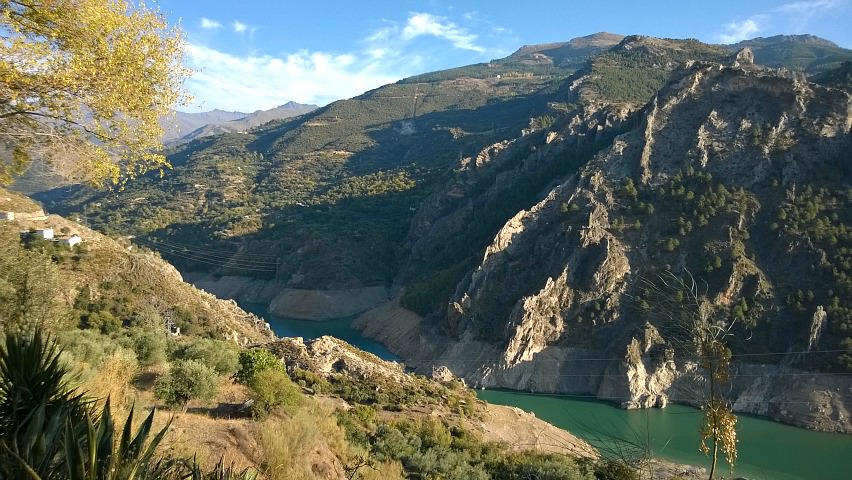 The town can be reached by public bus in forty minutes at the price of € 1.70 per person.

An absolutely trhrilling ride down with a very skilful driver who has abviously covered the route in many other occasions.

Before making this trip the next day, we decided to try the local restaurant. The food was delicious. We had also the chance to meet a Spanish-Danish family with whom we had spoken before the arrival.

They also drove a Flamenco Camper vehicle, a Ford Nugget named “Pepa”. We were able to share experiences and make some photos together.

We might have planned to stay longer at Las Lomas. The camp would also be suitable if you were travelling by caravan. You could use the caravan as a base camp and take your car to have short trips to Sierra Nevada.

We spent our last night pretty close to our starting point: Málaga.

Different campsites on the coast were available. After a short deliberation, we headed for “Camping Laguna Playa” in Torre del Mar, as it is located across a parking lot not far from the beach.

On the arrival at the campsite, our initial enthusiasm was however limited. 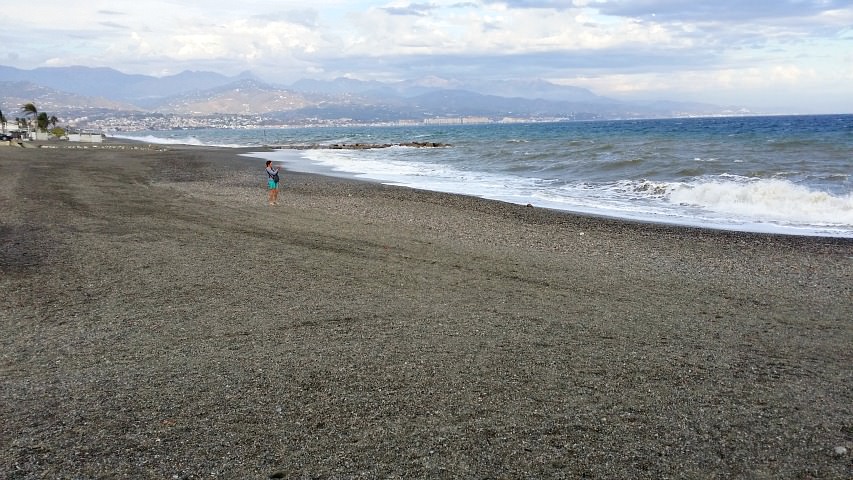 Despite having a good location and all the important features for a campsite, its sober atmosphere and plainness were rather disappointing compared to Las Lomas, including the price: € 24 per night.

The court, however, was quite full of campers, most of them “Snowbirds” (mainly seniors who spend the winter season here for a very low rate).

Family campers can also enjoy a small pool and a playground.

We still took a walk along the beach by the city centre and made our VW California spend our last night sheltering from the ordinary thunderstorms, which normally stop during the night.

The next day, as you may have already read, we left for Málaga where we could stroll through the city and give our dearest Lola back to Gonzalo with a sorrowful heart. We had an exciting and eventful time in Andalucía.

All accommodation places had their charm and will ever be kept in our minds. A special mention to “Camping El Sur”, “Ronda Camping”, “Tarifa Camping” and “Camping Las Lomas” in Granada.

I hope my Andalucía articles may provide you with tips and ideas which help you to enjoy a profitable visit.

Flamenco Campers have the perfect vehicles for this, offering special rates for you, dear readers!