The Volkswagen California celebrates its 25 years for road trips and adventures.

100,000 Californias manufactured since 1988 have resulted to three generations of this famous camper.

Volkswagen celebrated at Techno Classica 2013 (Essen, Germany) the 25th anniversary of the famous campervan Volkswagen California. Production figures of this vehicle were suitable for an anniversary: around 100,000 California vans have come off the assembly line over the past 25 years. At the stand of Volkswagen Commercial Vehicles could see a small retrospective of the history of this classic vehicle. All started with the T3, followed by the T4 and today with the T5. Naturally, their ancestors, the T1 and T2 completed the presence of this legendary recreational vehicle in this showroom.

The California was launched when air travel was expensive, tents were a bit out of vogue, and hence a camping holiday in a camper van experienced its greatest boom in the 1980s.  As in years before, visiting and exploring Southern Europe was the primary attraction – but no longer with a tent, towed camper, car or train, but with a camper van purchased especially for this purpose. This led to an entirely new type of touring holidays offering greater individual freedom – two days here, three days there. For Volkswagen, this was reason enough to put its own camper van on wheels: the California. 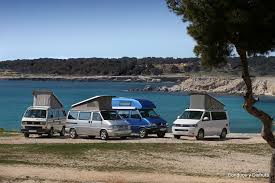 The idea was not entirely new. For a long time, Westfalia had been building a camper van named the Joker, which was based on the Volkswagen T3 Transporter. The basic layout of this custom camper van proved to be very practical over the years. A folding bench seat for two persons at the rear, which could be laid flat for reclining, and a narrow kitchen counter along the left side of the interior with a refrigerator, gas stove and sink and storage space.  This type of layout leaves a large space for entry through a wide sliding door.  However, the Joker with its well-conceived detailed layout and many small extras had become unaffordable for the average customer.  And this is precisely where Volkswagen stepped in. With a thick red pencil and an eye towards significantly higher production volumes, designers trimmed the features of the Joker down to a healthy level.

This set the stage for an entire generation of California camper vans.  Unlike high-roof models and those with a long wheelbase, the California featured a pop-top roof that articulated at the rear over all of its years and generations. The first California was based on the T3 generation, followed by the T4 and today’s T5. 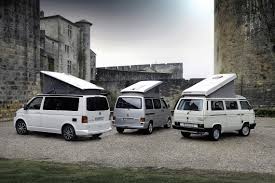 The latest California is now available in two specifications, the Beach and Comfortline. The Beach offers up to seven seats and a pop-up roof with a second double bed. The Comfortline has a higher specification with four seats, a kitchen with cooker and sink, fresh and waste water tanks, plus an electrically operated pop-up roof.