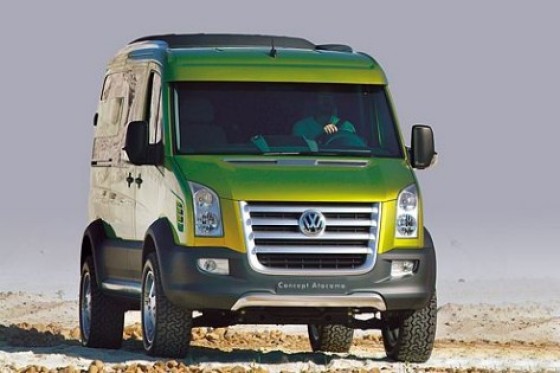 If Flamenco Campers needed a mobile office, the Volkswagen Crafter Atacama Concept would be high on our list of options to consider, but first we would have to look though our pocket.

In Volkswagen’s Wolfsburg factory has developed an impressive truck based on a Crafter van and have called Atacama in honor of the world’s driest desert, the Atacama Desert in Chile, South America.

It has a 5-cylinder TDI engine, 2.5-liter that delivers 164 hp with 200 Nm of torque at 2,000 rpm and a 6-speed gearbox coupled with a 4×4 wheel drive system mounted by Achleitner, a specialist in this kind of change.

They have paid special attention to small details such as aluminum added to the grill, lights and front air intakes. At the rear the ladder is the shape of the VW logo, a detail that says much for the effort put into its design, which shows that there is not a simple customization done by anyone.

The side window is very well made and although not much of the interior details are given , we assume that this model will be fully customizable, which initially will be built about 100 units.

How lucky for those who can access to one of these limited units and could have a great ride around the world for a long holidays.