Pepa and Lola – a match made in heaven 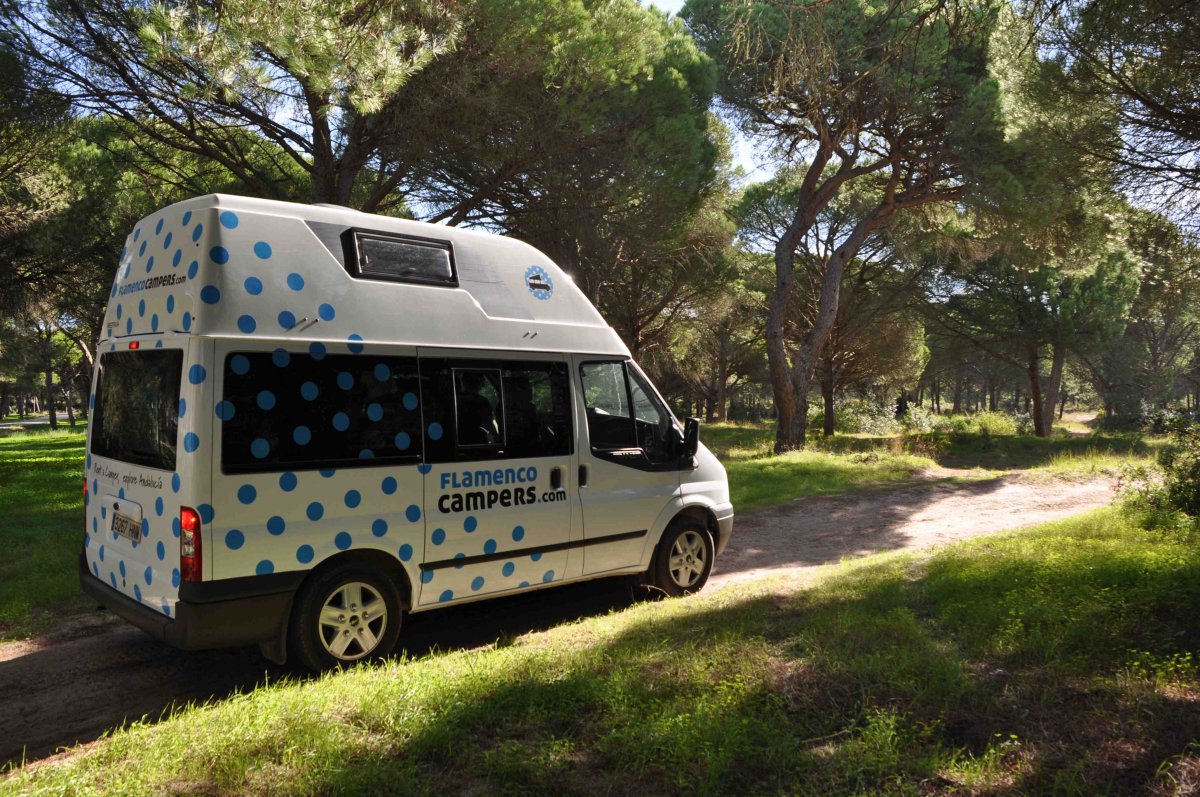 My daughter has been longing to sleep in a campervan for years – whenever we see one, she gazes at its exotic bulk beseechingly. So it was very rewarding for me, as a mother, to make her dream come true last weekend.

At the same time, on my long list of places still to visit in Andalucia, having lived here for nearly 14 years, is the Alpujarras. This mountain area, famous for its white villages, jamon iberico and stunning scenery, has been written about by many authors. Does the name Chris Stewart ring a bell?

And what better way to explore its winding roads, and make my daughter extremely happy, than a spring weekend in a campervan? Pepa, a converted Ford transit van kitted out by Westfalia, transported us smoothly from Alhaurin de la Torre near Malaga airport, headquarters of Flamenco Campers, along the Autopista del Mediterraneo motorway. After following the coastline for just over an hour, we turned off and headed up into the hills of eastern Granada province.

It didn’t take long for my children, Zac (10) and Lola (8) to suss out their favourite features of Pepa – mainly, the top bed, with its three windows – two at the side and one on top, through which a head popped out whenever we stopped the van (see below).

This became their area – and at 155x195cm, it was a decent size too, even for two wriggly, restless sleepers like them. Obviously once we were on the road again, they had to be safely strapped into the ample downstairs back seat, designed for three – with the nifty fold-up table tucked away, much to Lola’s chagrin.

They also loved the sliding windows, and had to be reminded not to stick any part of their bodies out on frequent occasions! Being a great organiser, Lola stored all the food in the clever cupboards, and woe betide us if we put anything away in the wrong place.

The van was well equipped with everything from a torch and maps – phone signals are not reliable up in the mountains, so paper is best – to groovy camper van-patterned melamine cups and bowls. The folding table, along with stools and camping seats (glass holder in the arm, essential for your evening copa de vino), were much appreciated too.

My husband loves to drive large vehicles, so he’s perfectly at home in a Ford transit, having driven them around extensive areas of Spain over the years. He found the driving position to be excellent, designed for long periods of time, and affirmed that the van was exceptionally stable on narrow, windy mountain roads with vertiginous drops – always a good thing. (I was too busy snapping photos of the breathtaking views to pay much attention, to be honest. The front passenger cubby holes were ideal for my maps, camera, notebook and other essentials.)

We were both constantly exclaiming “Mira!” “Look at that!”, as each snaky bend revealed yet another wonderful vista laid out before us.  Even screen-obsessed Zac started to be wowed by the gorgeous scenery – green-covered slopes, criss-crossed by tiny roads, backed by the bluest sky you could imagine.

While the 3G was more often no-G, it’s good to keep one’s gadgets well charged up, and the van had sockets all over – in the kitchen, behind the sliding door, by the rear seat window, above the passenger seat, and on the dashboard. Everyone’s phone, tablet, camera battery and walkie-talkie had its spot to ensure 100% charge. Then, when you stop at a campsite, you can choose to use the electricity, for about 5 euros – plug the van into one of its sockets and you have heating and functioning power sockets.

The former was appreciated when a gale blew up at our first port of call, in Balcon de Pitres campsite, an excellent recommendation from Gonzalo of Flamenco Campers. It’s a peaceful place with lots of trees, and unexpectedly beautiful flowers – in fact, between the perfectly-tended roses and the meadows full of wildflowers, the whole Alpujarras was positively blooming. We were toasty warm in our campervan, well protected from the howling wind outside.

The next day, we visited a place I’ve always wanted to see: the open-air theatre in Laroles. I say always – it was only built in 2014, but I’ve followed its progress closely and met its director, Anna Kemp, a few times. I was struck by her verve, and her creative solutions to raising both funds, and the theatre’s profile. Anna’s energy and determination have garnered support from top Spanish actors and directors, as well as international names such as Russell Crowe and the late, great Leonard Cohen.

We finished our weekend staying on a Costa Tropical beach, Castillo de Baños